After getting 2 hours of sleep on the plane and then trying to get as much sightseeing done in Venice as humanly possible, we crashed last night. So much that I set 2 alarms, snoozing the first one and then the second. I’m not a morning person, but Elise knew this going into it. My goal was to get up and out to St Mark’s by 7:30am to get some photos with, hopefully, minimal people in them. This wasn’t how it was going to play out. We woke up and realized it was 9am and we had to meet the transfer to the cruise port at 11.

We got ready real quick and made our way up to the breakfast buffet at the hotel terrace. One thing that is different in Europe than the US, is the coffee. I’m not a coffee snob in the least, I’ll drink Starbucks or Maxwell House, I can tell the difference, but it’s coffee. In Europe, the coffee is horrendous. But we added some extra sugar and went for it. Breakfast was great, some of the freshest croissants I’ve ever had, along with fruits, cereals, eggs and bacon. I don’t care where you go, bacon is always good. Top it off with salami, prosciutto and a few types of cheese.

A quick trip back to the room, we gathered our stuff and headed for the lobby. Or we thought we had all of our stuff, Elise left some earrings with a lot of sentimental value in the room. I’m going to get them back, it’s just going to take some doing. If I wake up in time, I could jump off on our way back into port, swim to the hotel, get the earrings and then take a water taxi to the cruise port, possibly beating them there. I could also have a heart attack.

We met our transfer guide, Silvia. She made friends quickly with Elise, saying she was radian, which I’ve been telling her all along. Though she still thinks that’s what they say to newly weds from 4 months ago. Our ride was quick, but the cool, crisp air was a great way to wake up. Our ship, the Rhapsody of the Seas, is one of the smallest in the Royal Caribbean fleet, but coming up beside it in a 25′ boat, it looks huge.

After going through the ticketing and boarding paperwork, we left our bags and headed onboard. As soon as you step onboard,you are hit with up selling for food and beverages, it doesn’t let up either. We wandered around, checking out the dining rooms, theater, casino and pool deck. If you’re looking for a reason to go on a cruise, I have 5 words for you. Soft serve ice cream machine. There are 2 of them on the deck by the pool. Eventually we got word the staterooms were ready. Finding our way down the hallway, dodging luggage at the other rooms, ours wasn’t here yet, but we went in and saw our digs for the next 10 days.

Our exterior stateroom was fairly roomy with a queen-ish size bed, couch, desk/makeup area  and a balcony with 2 chairs and a table. The bathroom however, it’s not big. I’m not small. This is going to be cute when I try to shave my head. There is also a fairly decent sized closet and a small “cupboard” with shelves in it for more clothes. Some people told us to bring extra hangers for clothes, it was nice to have them but not needed. A quick bite at the Windjammer Cafe(cafeteria style eating) and then we were off to a talk about some of the first stops and the excursions to make sure we picked the right ones. At the end of the presentations, they had a raffle for 3 prizes. The first ticket wasn’t even close to our numbers. second drawing, ONE NUMBER BELOW Elise’s ticket. Crap! The 3rd ticket, ONE NUMBER ABOVE! If you were wondering how lucky we are, we aren’t.

Before leaving the dock, we had our muster drill, bringing back memories of going to the hot lunch line in elementary school and having to form a PERFECT line or we’re not going anywhere. After, Elise and I went upstairs to get a drink and made our way back to the stateroom to watch as we left Venice. A lot of people were crowding the upper decks and chairs were at a premium so we took advantage of our room. The city was going to be on our side of the boat heading out and the sights were amazing.

Upon making our way out of the lagoon, we ventured to the dining room to meet our dining friends. There were 8 of us and all seemed to hit it off. We were worried we might get stuck with some bumps on a log but this was far from the case. We enjoyed meeting Andy and Margaret from Scotland, Duane from Atlanta(who was on his first of 40ish days at sea) and Barry, Barrie and Jo from London. Our server is Carmelo from the Dominican Republic, assistant Maria from Russia and our head waiter, “sexy” Maria as she referred to herself, from the Philippines. Our table is going to be really fun with a great mix of personalities from those of us sitting there as well as our wait staff. The menu blew us away, far from the chicken and vegetables diet I was on before going!

As we roamed around after dinner, we decided to head to the indoor pool in the “Solarium” and relax in the hot tub for a bit. I’m not sure if I’m getting old or if the nonstop walking yesterday in Venice did me in, but we were both toast. The hot tub helped ease the weary bones. Next stop, Zadar, Croatia.

Map of the ship on each level by the central elevators.

Piano in the lounge. 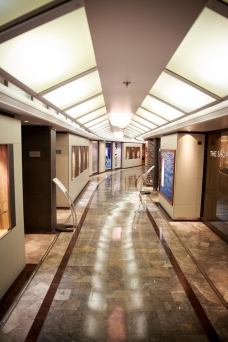 The Rhapsody of the Seas.

Outer edge of Venice as we venture into the Adriatic. 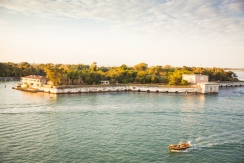 Canals in Venice as we head out.

St Mark’s Square from our balcony.