I got a heads up this morning when I was going to work that the very first Airbus for American Airlines was due into Bangor around 11:15. When I got to the office I kept an eye on FlightAware to track the flight progress and to make sure I got things done and make a side trip to the field on my lunch break.

Unfortunately 33 wasn’t the active runway so I couldn’t get some approach shots from the Odlin Rd, but did manage to get a few taxiing as well as a decent shot departing. Most shots were through the fence with a 70-200 f/2.8L and a 2x converter and I was surprised at the image quality. While I was waiting for the departure the clouds turned black and it dumped BUCKETS of rain, looking almost like you could swim across the ramp. My hopes were that they would wait until the rain let up, I really didn’t want to test the weather sealing on the lens and 6D. However, I would to get a shot. About 5 minutes later the rain stopped which provided a nice wet tarmac for the side on shot. As they departed and turned left to the taxiway I got a great view of the new sharklets on the wings. The curves of these are absolutely a thing of beauty, could be the plane geek coming out in me, but I have a feeling I’m not alone.

Now, I’m a bit old school and I really liked the classic AA livery. Until I saw this in person. While I’ll always have a place in my heart for the old livery, the new design is really nice and looks great on this plane(still my mind is blown AA went with an Airbus).

The departure shot was ok but I was hoping for blue sky as a backdrop and some bright sunlight to light the bird. No luck as the storm clouds were hanging around from the monsoon that passed through. But all is not lost, there is another one passing through on Saturday morning around 11:30 and the forecast is looking favorable! Hope you enjoy the photos, I’ll eventually get the uploaded to Flickr and Facebook but for now I’ll keep them in the gallery here and also on twitter. 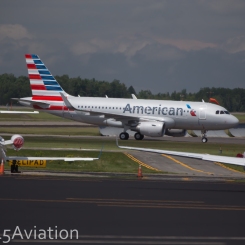 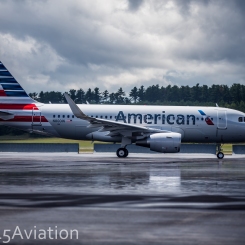 American’s new Airbus A319 with Sharklets arriving at BGR 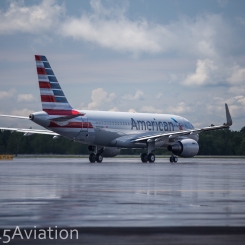 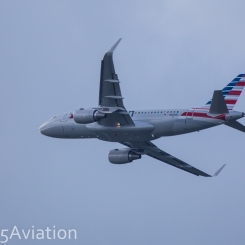 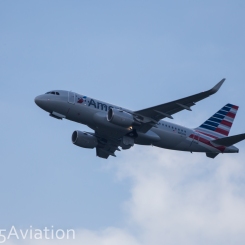