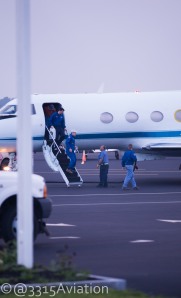 York High School graduate and NASA Astronaut Chris Cassidy returned home from the International Space Station on Tuesday September 10th after 181 days in space. He landed in a Russian Soyuz space craft in Kazakhstan with 2 other Russian cosmonauts. Cassidy boarded a Gulfstream III and headed for the states to undergo medical tests after his time in space. His first stop on US soil was at the General Aviation terminal at Bangor International Airport. There he briefly met with family members before continuing on.