After a 2 year hiatus, the Great(ish) State of Maine Air Show came back to the Brunswick Executive Airport(formerly the Brunswick Naval Air Station) for a Labor Day Weekend extravaganza. Ish. The Blue Angels and their herculean C-130 Hercules dubbed Fat Albert, along with the F-22 Raptor demo team highlighted an otherwise very anti-climactic show.

In all honesty, I wasn’t even planning on going, until my Fiance’s father mentioned going. So on Sunday morning, myself, the little lady and the soon to be in-laws packed up the Dreamliner(my truck) and ventured down I-95. Having heard from friends who went on Saturday, I was expecting a decent show. This is one of the few times an air show didn’t get me all giddy like a donut shop does.

This isn’t a knock on the performers. These people who get out there and quite honestly, do some bat shit crazy performances, they’re a-okay in my book. What the show was lacking, wasn’t in the air, but on the ground. 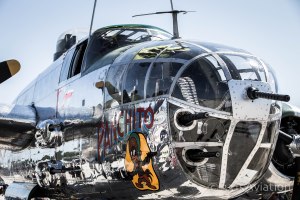 Or shall we say, the lack thereof. In a show that opens the gates in the mid morning, and doesn’t start flying until noon, you
kinda need something to keep people entertained for the 3-4 hours leading up to showtime. On static display were 3 aircraft. A KC-135 from the Maine Air National Guard, a C-5 Galaxy from Westover Air Reserve Base and a B-25 Mitchell “Panhcito” from the Disabled American Vets.

Sure, they are all amazing aircraft in their own right, but that was it. Off to the far end of the show, there were a few planes on display, but you couldn’t get close to see them, nor could you talk to anyone there about them. Mainly the US Coast Guard had a Blackhawk Search and Rescue bird parked about 500 feet away. Also a Kestrel 350, parked on the other side of the “do not cross this line” line. Now given that Kestrel has a facility in Brunswick, I would think that it would be a great opportunity to get out and meet people, tell them what you do, allow them to see the aircraft up close, ask questions and things of that nature. No, we will just park a plane out there and call it good. Buh bye.

The 3 that were there were very cool to see up close. Although I’ve seen the B-25 and KC-135 before, inside and out, the closest I’ve come to a C-5 was at the end of 33 in Bangor. So the ability to walk around, under and through it was pretty awesome. 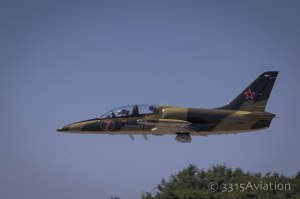 The actual air show was good. The L-39 Albatross trainer was a nice way to get your jet fumes pumping and the air dancing by Anna Serbinenko was a crowd pleaser. My fiance, who is slowly coming to the plane geek dark side said that was the highlight of the show for her. Scott Yoak’s absolutely beautiful P-51 Mustang took to the skies causing you to realize just how far aviation has come in such a short time. Especially when the F-22 Raptor took to the sky with the P-51 for a heritage flight.

Other performances included Kent Pietsch in the Jelly Belly tail dragger starting off
with fancy antics, landing on an old camper and finishing with a show of just how good of a pilot he is with his glider technique. Sadly, they didn’t toss any Jelly Belly’s out of the plane, just ailerons and a tire.

The jet car with Bill Braack was, well, if you’ve seen a jet powered anything once, you’ve see it a thousand times. My complaint was the smoke from the car, which, fortunately there was a breeze enough to blow it away before anyone in the air went up and caused any issues with photo visibility.

The B-25 Mitchell “Panchito” displayed how aerial ass kicking was done back in the day. The agility and power of this gorgeous aircraft is amazing. Great care is obviously taken to maintain it and keep it ready to go. It is also a great way to bring education about the Disabled American Veterans organization. Our brave men and women go off to fight for our freedom, yet some come home with injuries, both mentally and physically. We need to treat them like the hero’s that they are. The DAV is helping to get them the care that they need.

My first chance to see the F-22 Raptor was 2 years ago in Lakeland at Sun N Fun. Sadly I got caught in traffic and made it to the flight line just as the pilot was climbing out. This time I wasn’t missing it. The power this piece of ass kicking engineering possesses is unreal. I pity whoever is on the bad side of this plane, because you’re going to get hurt. Very badly. I mean, just looking at it would make me raise the tightie whitie flag. But hey, if you think you’re going to come out on top when you go up against it, good luck. 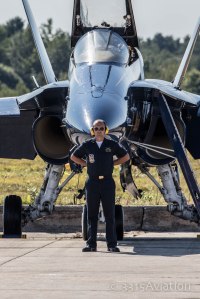 I don’t care how many times you’ve seen them, the Blue Angels never disappoint. Ending the show were the F/A-18s and the C-130 Hercules, otherwise and affectionately known as, Fat Albert. The excellence these men and women possess is unreal. Navigating with just inches to spare, at speeds where if you make a mistake, you’re not going to have time to react, or realize what happened.

Sadly, there were some mechanical issues with two of the Blues so it wasn’t exactly a full show. Nonetheless, they still know how to amaze the crowd despite being down 2 aircraft.

The Major Downfall of the Day

Before the flying took place, as we were roaming around trying to find shade or a slight breeze to cool down, we walked by “Panchito” and the DAV display. As I was taking a picture of the front of the B-25, a young girl started climbing on the plane. Now, two things, the parents were right there looking at the plane, the little girl started climbing before they could react and tell her to get down. You can say the parents should have had better control of their child, I get that. There were signs saying “do not touch” and really, people were being very respectful of the aircraft. However, if the caretakers of the B-25 didn’t want people touching it, they really should have had a perimeter rope set up keeping people away. But there wasn’t a perimeter rope.

The next thing we know, an older man from the DAV/Panchito crew came running over and yelling at this girl about how that could break and why would she do such a stupid thing. The parents were right there and pulled her away from the plane. The old man kept on yelling and making a huge scene. Finally, he went back to a table where the parents went over and spoke with him. Along with a few others who were nearby to witness the event. One guy, from a distance was letting the old guy have it. If nothing, this girl, is going to remember this and not respect the military men and women because she associates military service with the grumpy old man. If I were with the DAV, I would be embarrassed by the actions and relieve this guy of his duties and retrain the rest on how to handle issues that may arise. And how to put a perimeter rope up to keep people away.

If the (not so)Great State of Maine Airshow comes back next year or in future years, I won’t be in attendance unless things change. Opening at 8am but not flying until noon, with only 3 static aircraft to check out is absurd. Unless you’ve got a kid who can stay occupied in a bounce house for 3 hours, you’re going to wish you had stayed home. Poor traffic management, weak static displays and only 4 hours of flying hardly justify the cost of admission. Plus, if you’re photographing any of the aerial displays, forget it, you’re going to be back lit the whole time. Save your money and go to either Westover for the Great New England Air Show or to the Rhode Island Air Show at Quonset Point. 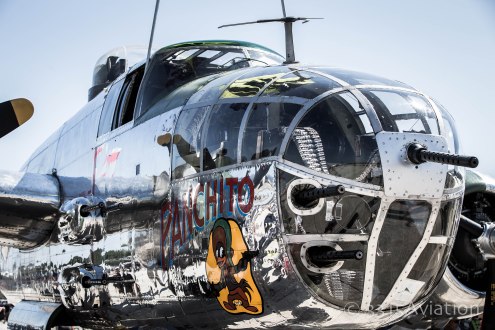 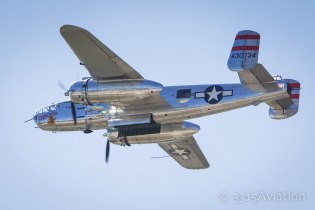 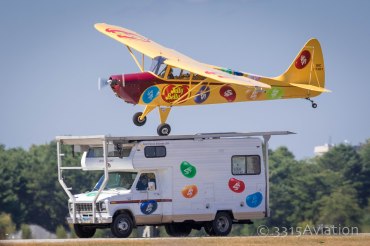 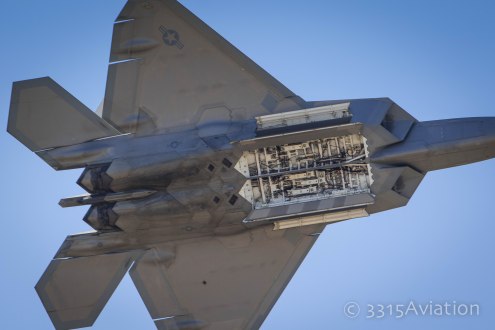 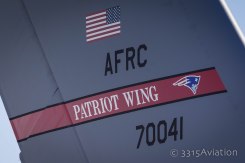