After months of construction, the team at Bangor International Airport revealed what many of us had been waiting for since the announcement of the project. Airport Director Tony Caruso and his management team welcomed a select amount of guests for a first hand look at the upgrades in the passenger check in area at the domestic terminal of BGR. Caruso thanked all of those responsible for the project from beginning until now, recognizing councilors, local legislators, engineering and design firms, the team at BGR along with prime contractor Sheridan Corp of Fairfield and their crews. He also, along with Marketing Manager Risteen Bahr, Caruso and Assistant Airport Director James Canders and Finance Manager Tim Reynolds presented several “gifts” to Superintendent of Operations Robbie Beaton to assist him in the 3rd and final phase of this project.

After many laughs it was time to see what everyone was there to see. With Bangor City Councilors, representatives from Congressman Bruce Poliquin’s office, Maine Troop Greeters, airport employees, airline and rental car representatives present, councilor Nelson Durgin assisted in pulling back the curtain to reveal the upgrades to the terminal.

Behind the black curtain was a line of airline ticket counters adorned in beautiful wood with quartz counters and HD video boards. Gone are the boards with letters and placards manually placed for arrivals and departures. Also out of sight are the TSA baggage scanners that have been moved to a room behind the ticketing area. Now, when agents weigh and check bags, they are placed on a belt and taken to a new state of the art baggage scanning system.

The airlines will move to their new digs from

temporary ticket counters on the far left side of the terminal. American, Delta, United and Allegiant will begin operations from the new counters on Monday morning. Of note there are 4-5 extra slots open for future expansion at the ticket counter.

The biggest improvement is the removal of the bathrooms, and TSA/Bangor Police offices on the ground floor. In their place arewindows allowing for a great amount of natural lighting into the space. As Caruso mentioned, Robbie Beaton wanted the upgrades to have a “wow factor”. It seems as though mission accomplished through phases 1 and 2.

Congratulations to the City of Bangor, Bangor International Airport and to those who travel through BGR. 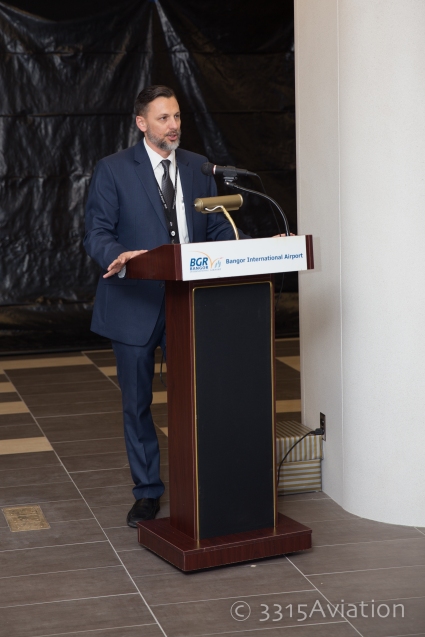 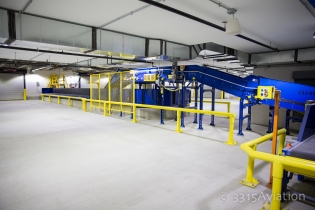 Guests check out the renovations. 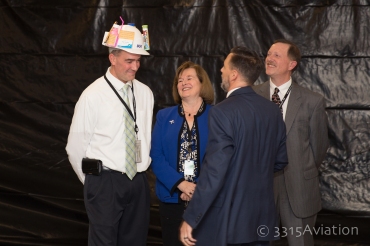 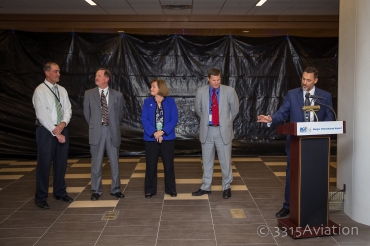