Corfu, out of the 3 island we visited is definitely the most modern and seemingly least touristy of them all. There were several more residential areas with your typical day to day happenings, be it construction of a building or people coming and going from stores and cars zooming everywhere. It was also the cleanest as well.

As our bus got closer to the palace, the street was, at best one lane, in some places it seemed like the mirrors on the bus would scrape on the buildings as we went by. The driver on the other hand had ice running through his veins and diesel running through the injectors of the bus at full throttle. Arriving at the Palace, the tour guide gave us “tickets”, or laminated pieces of paper with “ticket” written on it. They were quickly collected at the gate as we entered. 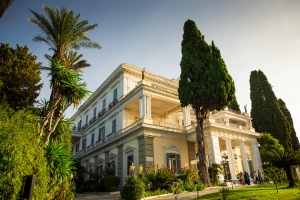 The palace was built by the Empress Elizabeth of Bavaria. Corfu was her favorite place to vacation given her deep admiration for the people of Greece, the language and culture. She had it built with an Achilles theme to the palace and grounds, including portraits, statues and more. The palace was purchased by Kaiser Wilhelm after her death and used as a hospital during WWI and in WWII as a headquarters for Axis powers. From the mid 60’s until the early 80’s the upper levels were used as a casino. After the casino lease wasn’t renewed, the grounds were turned into a tourist site.

Walking through the gate, you are greeted with beautiful gardens and the front entrance to the palace. In the main entrance is a grand foyer with several rooms branching off including a chapel, a room dedicated to Kaiser Wilhelm as well as ornately painted walls and ceilings throughout the palace.

Making your way outside, marble steps greet you to lead you up to the gardens. There are a few paths around that were shut off to the public to prevent fires(I’m assuming from discarded cigarettes). As you get to the top, there is a long path with a giant statue of Achilles at the end. Palm trees, cobblestone walkways, greenery and flowers line the grounds from the palace down to the statue. The statue overlooks the island and down to the sea.

We were left with a half hour or so in our tour to roam around and check things out. Before heading back to the bus, I caught out of the corner of my eye, a very magical sight. A sign next to a small door with the word “DONUTS” jumping out at me. Of course we had to venture in and try one of the greatest delicacies known to man. With a Bavarian Creme donut in hand, we ventured to the bus and began the trek down to our next stop.

Little did I know, our next stop was where I could spend hours. An area with a restaurant that looks down on the Vlacherna Monastery. And about 500′ from the piano keys of 35 end of the runway at the Corfu Airport.  The monastery is one of Corfu’s most famous landmarks. The all women’s monastery was featured in the James Bond movie For Your Eyes Only.

The restaurant with outdoor seating is a prime location to watch planes land. Needing at most, a 70-200 lens(I took this photo with a 24-70), you will be treated to mainly 737/A320s and 757/A321 size aircraft from all over Europe. Planes, when departing, typically have to back taxi on the runway as there aren’t any taxiways, turn at the end and then begin their takeoff roll.

Sadly, our stop here was short lived. Our tour was off to the final stop, Old Town Corfu. We arrived and our tour guide helped to orient us with the sights to check out and where to meet up for the bus back to the cruise port. Soon we were out on our own to explore.

The green is filled with people relaxing, kids running around and others playing games. Walking to the other side, you get a sense of how beautiful the architecture is. Despite a MacDonald’s greeting you, the ornate work in the buildings is unreal. We set out walking through the town, browsing for some souvenirs and food. The streets were filled with shops and cafes as we made our way towards the New Fortress of Corfu. Climbing the steps to the top, we were greeted with panoramic views of the city scape. 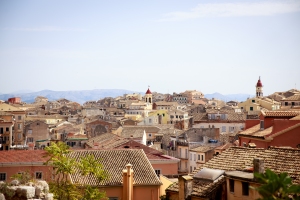 After roaming around the fortress, we made our way back down into the town and to partook in our last authentic gyro as well as another local beer. We hit a shop to get some of the popular white linen shirts for our fathers and a special gift for some of my friends I had noticed at every stop in Greece. Beer bottle openers carved from wood in the shape of certain male body part. I had to ask if there was significance to them but the shop owner just told us it was a supply and demand type thing. Weird? Yes. Moneymaker? No doubt. 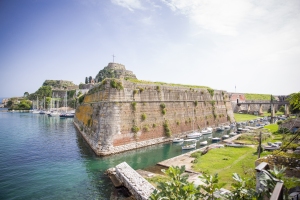 Making our way back to the rendezvous point for the bus to the cruise port, we stopped by the Old Fortress for a few photos(though there is an admission fee and we didn’t really have time to venture in). At the terminal, one thing we thought was odd, going through security to get on the boat, not as we entered the port. Making it through, with a few laughs from the security workers at my bag full of elaborate bottle openers, we ventured to the ship. Our balcony provided a great view of people hurrying to make it back on the boat. Not to mention watching the people on the other ship across the dock living it up, particularly the older gentleman dancing with some of the young ladies working on the ship as his wife shook her head, either laughing, or thinking how he is sleeping on the couch. Soon, we were pushing off and bid our last port of call farewell on this trip of a lifetime. We have a day at sea and then wake up in Venice to catch our flight from Marco Polo Airport back home. 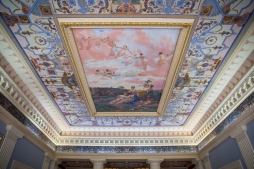 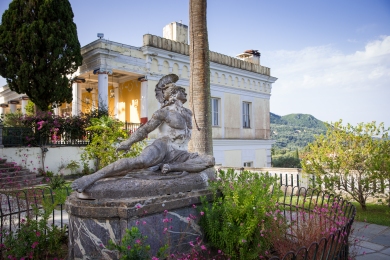 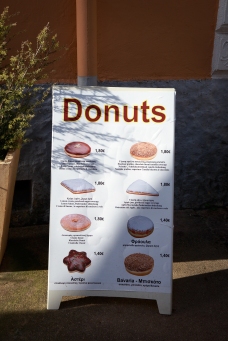 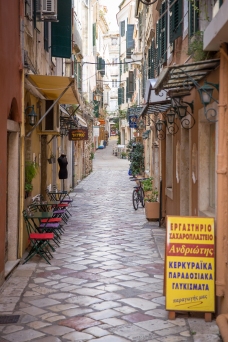 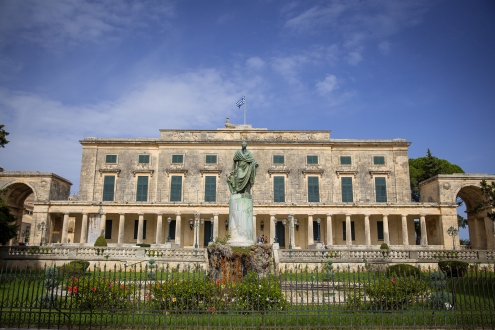 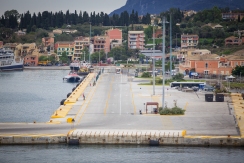 One thought on “Our Honeymoon – Day 9 Corfu, Greece”