Two weeks of coordination between several organizations culminated in an Antonov Airlines AN-124 Ruslan’s front cargo door opening to receive two 53′ shipping containers and other miscellaneous pallets on the ramp at Bangor International Airport.

The shipping containers housed a high tech water filtration system manufactured in New Gloucester, Maine by Emerging Compounds Treatment Technologies for the Australian Ministry of Defense. Logistics were handled by a team from DHL Global Forwarding, Antonov Airlines and the team at Bangor International Airport.

Shortly after 6:30 on Thursday, September 21st ADB267F touched down on Bangor International’s 11,440 foot runway after a 10 plus hour flight from Campinas, Brazil.  With the sun setting, the AN-124 parked north of the terminal in the shadows of the control tower. Upon clearance from US Customs officials, the ramp came alive. 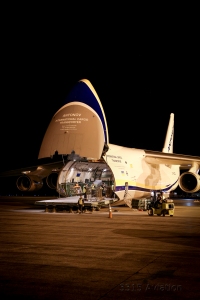 The nose on the Ukrainian Antonov opened up and the interior ramp started to unfold. Crew members set out stands for the ramp to rest on as the front gear began to lower, causing the front of the plane to crouch closer to the ground. Inside the plane, rails were being set into the floor that would allow the cargo containers to glide flawlessly with the winch into their positions for flight. Bangor International Airport ground support crews began placing ramp sections off the folding ramp in the front of the plane with a forklift while another forklift was unloading a tractor trailer with pallets of miscellaneous equipment and parts for the water filtration equipment in the shipping containers.

An hour or so after the crews began assembling the ramp, a crane from Thomas DiCenzo, Inc of Hermon was being escorted across the ramp and began to setup when the ramp was completed.

Truck drivers from M&S Logistics in Candia, NH had been busy shuttling around the box vans with pallets as well as the shipping containers. When the crane was ready, the first shipping container backed up to the crane. Weighing in at roughly 42,000lbs, the first container was rigged and slowly picked off the chassis and swung into place on the ramp at the front of the aircraft.

Antonov Airlines crews went to work hooking up the pulley system that would pull the container into the belly of the might Ruslan. Soon, they were underway pulling the first container into the plane until there was enough room to place the second on the ramp in front of it. M&S drivers again shuttled the second unit into place, weighing in at about 20,000lbs, it too was picked and placed on the ramp. The 2 containers were then secured together and the winch began to haul them both into their final spots for the trek across the world. 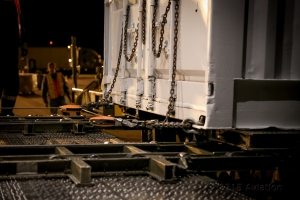 Once in place, crews then filled in and balanced out the plane with the remaining pallets of parts and equipment that were placed on the tarmac for inspection by US Customs officials before being loaded. After the cargo was secured, ramp disassembled and the door to the Antonov closed, crews called it a night and departed Bangor for Anchorage, Alaska at 4:19pm on Friday the 22nd for the first leg of the journey to the Australian Outback. 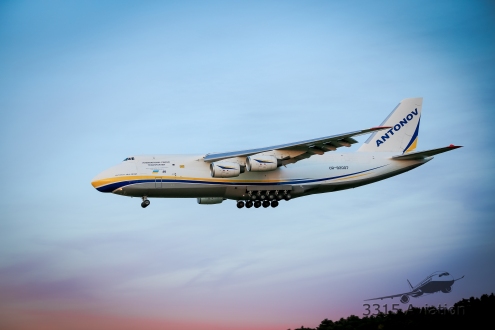 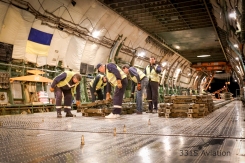 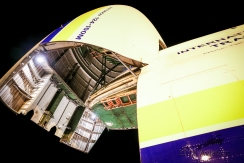 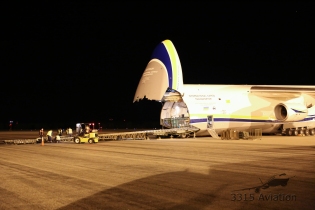 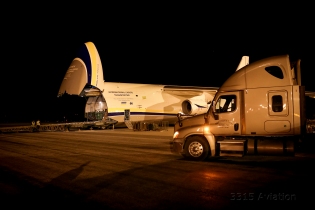 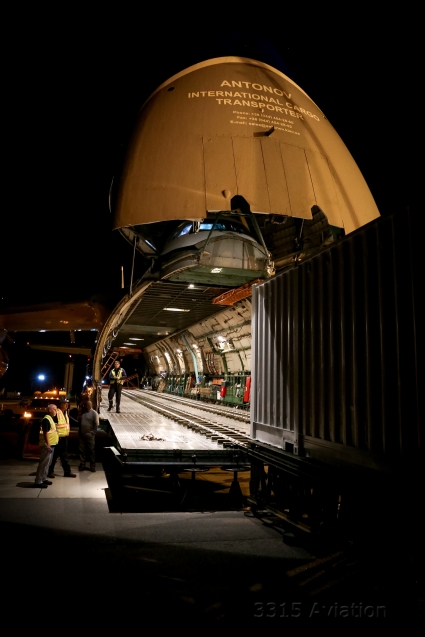 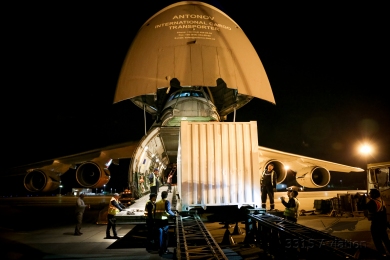