After a stopover in Dunkirk, New York last night, the Berlin Express made it’s appearance in Bangor on Thursday morning. Originally scheduled to land around 6pm Wednesday night, the North American P-51B Mustang touched down on runway 33 at Bangor International around 10am local time.

The Berlin Express rose to notoriety in World War II when American Pilot Bill Overstreet flew the aircraft under the Eiffel Tower while engaging a German Messerschmitt Bf 109G. Overstreet took on heavy fire but was able to escape with the P-51B in tact after downing the German fighter.

Now, 73 years later, the Berlin Express is recreating the same route it took in 1942 as part of Allied Forces buildup in Europe when it left Texas and landed at the Duxford Airfield. The journey will encompass 4 days and cover more than 5,400 miles. The Berlin Express will participate in the 2017 Royal International Air Tattoo even at RAF Fairford in England.

The team had a 4 hour layover while fueling and performing maintenance checks on the ramp at the GA Terminal in Bangor. Personnel from the Maine Air National Guard, Bangor International Airport, Airport Fire Department, local media and more were treated to a special ramp visit to get an up close look at the beautiful bird.

Around 2pm, the Mustang’s Merlin Engine came to life with a brief puff of smoke and then it was on. After a brief taxi, the P-51B and King Air support plane held short of the runway before their engines roared and they took to the skies for the next leg of their journey.With the stop in New York last night, the crew is now in Goose Bay, Labrador tonight and will continue on tomorrow. For tracking of the Berlin Express’ flight, check out http://www.pursuitaviation.com/berlin-express or http://www.horsemenflight.com. 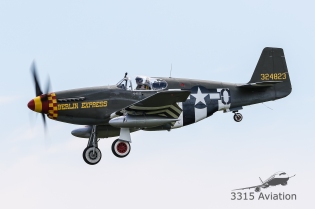 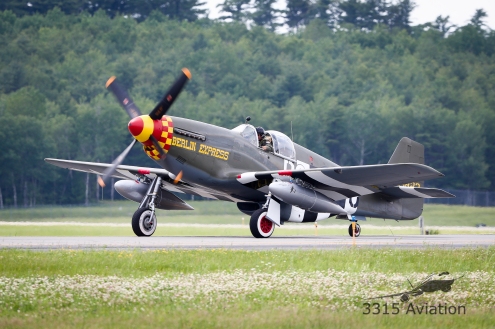